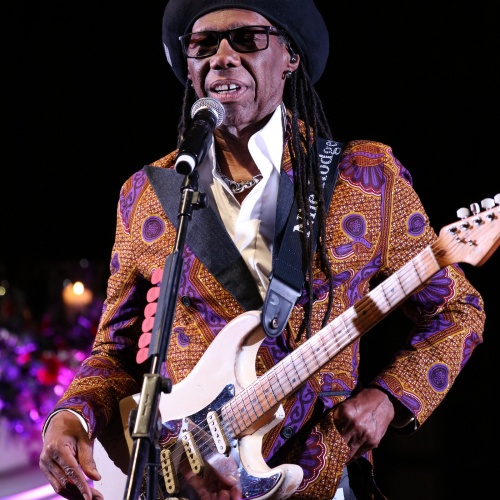 In the second episode of Deep Hidden Meaning with Nile Rodgers, Nile is joined by record producer Andrew Watt.

Nile: Madonna and I, we argued over – nicely argued – and it was because I was trying to look out for her. I wanted to her to have the best possible records she could have. I wanted to put out the song ‘Material Girl’ first because I just thought it was a better song, I thought it was more catchy, that’s what we should hit with. And Madonna was like, “No, we should come with ‘Like a Virgin’” And then she named the album ‘Like a Virgin’, and she sat me down and she schooled me, she sat me down and said, “You don’t understand, to a woman losing your virginity is a really important thing,” and so on, so I’m thinking as a guy, I mean, I guess it’s sort of important to us, for a minute…

Sometimes great works like that really happen organically, that quickly. A lot of people don’t believe me when I tell them that the David Bowie album, ‘Let’s Dance’ is the easiest record my whole life. We did the whole thing from start to finish in 17 days. The whole thing, mixed done everything, vocal overdubs, Stevie Ray Vaughan overdubs, everything. 17 days done. I met David at a bar, I was hanging out with Billy Idol. And we walked into this club, and true story, Billy and I both see David at the same time, and Billy goes “Bloody hell, that’s David f**king Bowie!” And as he says, Bowie, he barfed! He was pretty drunk. And then he wiped his mouth with his sleeve and went, “Hello mate!” and that was it.

It’s interesting that when I play a song, I’m always trying to interpret it all throughout the process, because I come from the old school where we believe in what we call track development, and we didn’t necessarily do it with so much production technique as much as we did it with playing. The secret to our records was that we would make the song, we play the song from the top to the bottom, but we would actually edit the end and put it at the beginning because all my songs basically start with the chorus, so we would take the hot part and put it at the beginning, because we knew that after we jammed it for an hour or so, we finally were ready to cut it, that that energy at the end we wanted at the beginning of our records, and that’s what we would do. That’s a secret. So when we go “Freak Out!”, that’s actually from the end of the song and we moved it to the beginning.