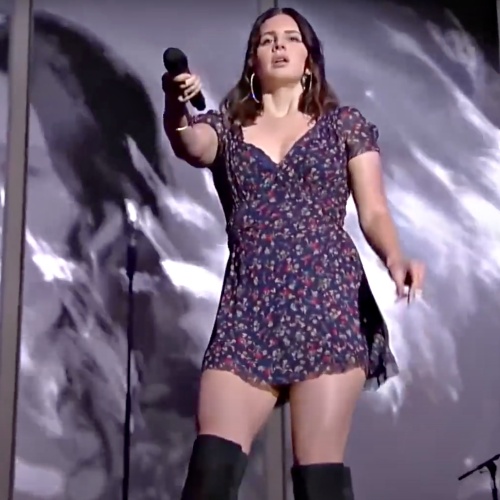 The ‘Born to Die’ singer has revealed she struggled making her follow-up to 2019’s ‘Norman F****** Rockwell!’ because, at first, she couldn’t get to grips with where she was going with the songs, which sounded “new folk” and “country”.

However, once she laid down the track ‘White Dress/Waitress’, which she has described as “the defining moment” of the record, it all pieced together and she feels “really good” about the finished product.

The record’s producer, Jack Antonoff, asked Lana if “there was a looseness” to making the record during their chat for Interview magazine, to which she replied: “Not really. I’ve been really stressed about this album. From the top, we knew what ‘Norman’ was. But with ‘Chemtrails’, it was like, ‘Is this new folk? Oh, god, are we going country?’ Now that it’s done I feel really good about it, and I think a defining moment for this album will be ‘White Dress/Waitress.'”

Lana found herself doubting whether the album was “perfect” enough, while she admitted she got caught up in her personal life.

And she even hinted that a track called ‘Dealer’, which is yet to be confirmed to have made the final track-listing, saw her “screaming her head off” in frustration.

She added: “The one thing that makes me upset is that if I hadn’t been so distracted with my personal life and my poetry, I could’ve broken it down in a more delicate, precise way. I guess the way I could’ve done that is just by adding one more defining song to it. Right now it’s really, really good, but I don’t know if it’s perfect, and that really bothers me. I think I need to add that song, ‘Dealer’, where I’m just screaming my head off. People don’t know what it sounds like when I yell. And I do yell.”

The 35-year-old star added that she ended up with an album that is sonically “Midwestern-inspired”.