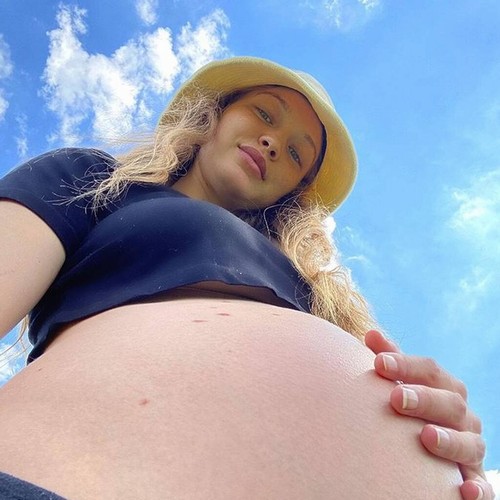 Gigi Hadid has shot down speculation about giving birth by posting a series of pregnancy selfies on social media.

The supermodel’s dad Mohamed Hadid caused a stir this week by offering up a heartfelt tribute to his grandchild, prompting fans to believe the model had already become a mother for the first time. Mohamed gushed about Gigi’s baby and what an amazing grandfather he would be in a letter he uploaded on his Instagram page on Wednesday, but he later explained the child hadn’t actually been born and then deleted the love note.

Heavily pregnant Gigi has been reminiscing about her journey to motherhood by sharing a series of throwback photos from the final stages of her pregnancy. In the snaps she looks down at the camera as she shows off her large bump while wearing low rise sweats and a blue cropped top.

Gigi has spent most of her pregnancy at her mom Yolanda Hadid’s farm in Pennsylvania, where she quarantined with family during the Covid-19 pandemic. The 25-year-old star confirmed her pregnancy in April, following growing speculation she was starting a family with her musician boyfriend Zayn Malik.

“We are very excited and happy and grateful for everyone’s well wishes and support,” she said at the time.

“Especially during this time, it’s a nice silver lining to be able to be home and be together and really experience it day by day.”