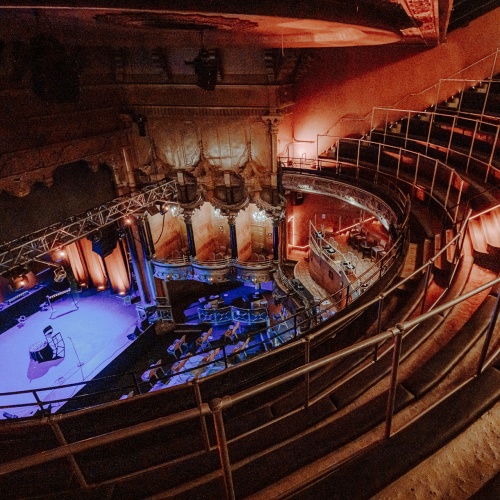 Following on from three successful Save Live Comedy shows in August, featuring the likes of Al Murray, Jayde Adams, Ed Gamble and Kerry Godliman, which raised over £15k; the announcement that Clapham Grand is one of 135 grassroots music venues to receive emergency funding as part of the Government’s £1.57 billion Culture Recovery Fund; and raising over £50k themselves, the Clapham Grand is excited to announce it is once again opening its doors to customers for a number of shows in September, October and November.

To coincide with a number of confirmed shows, the Clapham Grand has this week unveiled the reopening of its top balcony, which has been closed for 15 years – not in use since Oasis last played at the venue! The newly refurbished area will increase the post-lockdown capacity of the venue by 100, taking it to 400 (these numbers are reduced from 1250 due to physical distancing), bringing the venue back to its original Victorian glory. Refurbishing and opening the upper circle has given the venue an extra 100 tickets to sell with distancing, although is still trading over 50% below the former capacity of 1250 – but these extra tickets give the venue more chance to make the new financial model work and survive this period.
This Sunday just gone saw Russell Howard take to the Clapham Grand stage as part of a run of ‘work in progress’ shows and this Friday 18th September, Frank Turner, returns to Clapham Grand – after raising £25k for the ‘Save The Grand’ campaign by playing a Government endorsed pilot of his ‘Independent Venue Love’ live stream from the venue in the summer.
Frank Turner has been pivotal to the venue’s journey to survive after the enforced Covid closure, and it is therefore fitting to welcome him back to the official opening of Clapham Grand’s upper circle for the first time since 2005.
More details attached and below.

15th, 16th, 17th Sept – Emily Atak
Emily Atak returns to The Clapham Grand for three nights, filming her new ITV show – and she’s inviting an audience to come along and join in all the fun for free

18th Sept – Frank Turner
English folk hero Frank Turner, returns to The Clapham Grand after helping raise £25k for the venue with their ‘Save The Grand’ live stream, and playing the first event indoor live concert for the Government endorsed pilot. This very special show will be to celebrate not just The Clapham Grand’s reopening, but the first live concert with the refurbished Upper Circle open!

19th Sept – Courtney Act
Iconic Drag Race & Big Brother star, Courtney Act is coming to The Clapham Grand for an evening of drag, music and comedy! She will host a one-off intimate evening like no other, performing exclusive tracks from her upcoming album and show ‘Fluid’, alongside fan favourites, a special interactive Q&A session hosted by Glyn Fussell – founder of Sink The Pink – and some very special guests. There are in-person and streaming tickets available

22th Sept – The Horne Section
Following their hit BBC Radio 4 series, their own TV Special at the London Palladium, appearances as the house band on Save Our Summer and The Last Leg, an iTunes chart-topping podcast and many years of sell-out shows at the Edinburgh Fringe Festival and London’s West End, the Dictionary Corner regulars on 8 out of 10 Cats Does Countdown and the first band to ever host Never Mind The Buzzcocks, the group of outstanding musicians and one non-musical stand up perform at the Clapham Grand. There will be comedy, songs, enthusiastic dancing and a lot of mucking about. A unique show from the hugely talented band and Alex Horne, the creator and co-host of The Bafta winning and Emmy nominated Taskmaster

23th and 24th Sept – Scummy Mummies
The Scummy Mummies will be welcomed back to the Clapham Grand at the end of September. Following a sell-out run at the Edinburgh Fringe, comedians Ellie Gibson and Helen Thorn return with an all new show – new songs, new jokes and new catsuits

28th & 29th Sept – Jimmy Carr
Clapham Grand welcomes the one and only Jimmy Carr, playing a run of intimate shows at the venue. Jimmy’s brand-new show contains jokes about all kinds of terrible things. Terrible things that might have affected you or people you know and love. But they’re just jokes – they are not the terrible things. Having political correctness at a comedy show is like having health and safety at a rodeo. You’ve been warned

2th Oct – Louise Redknapp
In October Louise Redknapp performs at The Clapham Grand for one night only! She will perform all her greatest hits, Eternal classics and tracks from her latest album Heavy Love. This is will be an intimate evening of pop music not to be missed including an interview and interactive Q&A with Richie Anderson from BBC Radio 2. A rare chance to see a pop superstar in a fully physically distanced venue of 300 people, and globally live streamed to an audience around the world

3th Oct – Mean Girls ‘It’s Saturday 3rd October’ Specual Screening!
It’s Saturday October Third! So how could Clapham Grand do anything other than welcome back movie-goers to see this fetch movie night.

6th Oct – David Thomas Broughton
Renowned English avant-garde singer and performer David Thomas Broughton performs at the Clapham Grand on Oct 6th as the acclaimed London’s ‘Best Independent Music Promoters’ Baba Yaga’s Hut returns to indoor live concerts! Fresh from a wonderful Complete Guide to Insufficiency show at Bush Hall in November this show will encompass all of his albums and new material in the intimate all tabled & seated setting of The Clapham Grand

13th & 14th Oct – Diane Chorley
On the eve of her debut album’s release, Diane Chorley comes to The Clapham Grand to perform ‘Greatest Hits, Vol. 1’. The first date flew out, with a second needing to be added on

15th Oct – Magical Bones: A Kind Of Magic
Following an acclaimed run of sell out live streams of A Kind Of Magic is back on the live stage, hosted by the internationally acclaimed Magical Bones. Direct from his jaw-dropping appearance on Britain’s Got Talent, Bones will be joined by some of the hottest names in contemporary magic and circus for a truly unique live entertainment experience

18th Oct – Circus Of Horrors
The new Circus of Horrors show Revamped & Rockin will be an immersive celebration of it’s astounding 25 years. It will include an amazing amalgamation of acts, driven by a rock’n’roll soundtrack, and a show that will have the audience sat on the edge of their seats – when not falling off it with laughter! The almighty cast that stormed into the finals of Britain’s Got Talent is now a West End & World Wide Hit and will take the audience on a rock n’ roller coaster ride of Unbelievable, Bizarre & Beautiful acts. It is a circus like no other. Whether a Rock fan or theatre goer The Circus of Horrors has something for everyone.

21st Oct – Myra Dubois: It Came From Rotherham
The star of this season’s BGT, Myra DuBois, presents a spine-tingling evening of ghoulish delights with her creepy cabaret! Myra will try to present an evening of Halloween entertainment, but ghosts from her past will continue to haunt her throughout the evening! Will the other-side make contact? Can Myra’s Rose make sense of the spooky goings on, and what’s that slobbering shape lurking in the shadows? All will be revealed in “IT CAME FROM ROTHERHAM!”

22nd Oct – The Dualers
Two of south London’s favourites, Tyber & Pete, frontmen of much-loved ska & reggae outfit The Dualers perform at The Grand for one of their first physically distanced shows on 22nd October!

23rd Oct – Slav For You
London’s sensational Polish drag collective are back after three sell-out shows at East London powerhouse The Glory and BBC coverage across the summer, for their first-ever Clapham Grand takeover

31st Oct – The Rocky Horror Picture Show Quadruple Bill (3PM / 6PM / 9PM /12AM)
To celebrate Halloween, the Clapham Grand is hosting a spooky movie night – which will be fun-filled, costume-garbed and a night of fun and debauchery around one of the best movies ever made on the spookiest night of the year! Let’s do the Time Warp again, and again, and again…..AND AGAIN!

2nd, 3rd, 4th and 5th Nov – Daniel Sloss: HUBRIS
The all-new, 11th solo show by Scotland’s international comedy star, hot on the heels of his ground-breaking, global smash-hit ‘Daniel Sloss: X’, comes to The Clapham Grand in November. With his incredible specials ‘DARK’ and ‘Jigsaw’ taking Netflix by storm, and a trail of Scottish box office records left in his wake, he’s one of comedy’s hottest acts right now

11th Nov – Crystal Methyd’s Wonderland
The inimitable Crystal Methyd (Ru Paul’s Drag Race Season 12) will take the audience on a romp through the snow. Expect the unexpected from this uniquely crazy cookie queen and her special guests

For those that don’t get hold of tickets, the Clapham Grand will also be broadcasting many of the shows in a TV quality live stream. Although the Clapham Grand is excited to have an audience return to once again enjoy entertainment safely inside the venue, and to have reopened the top balcony to increase capacity, it will continue to broadcast to thousands of people around the world online too.