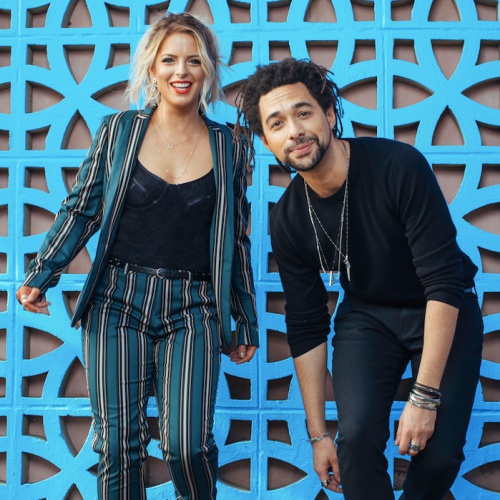 The Shires return tonight for the next episode of London to Nashville Radio with The Shires on Apple Music Country. In the show the band’s Ben Earle and Crissie Rhodes talk to their fans about their favourite songs and all the things that make country music a phenomenon beyond any one location.

In tonight’s episode, which airs at 10pm BST, the London-based group talk about their current single ‘Crazy Days’ and how it’s helping fans during the pandemic, how Ben spent part of his childhood in Windsor Castle and sang for the Queen, Crissie getting fired at work for singing too much, doing impressions with Robert De Niro on British TV, and more.

Ben on growing up in Windsor Castle and meeting the Queen

Ben: “Yeah [I lived for a while in] Windsor Castle. I was a choir boy in Windsor Castle. I sang in the choir there and then my mum married one of the guys in the choir and he had a house in the castle at the time, because you get one while you’re singing there. It’s funny actually, because whenever we’re in Nashville and people say “do you know the Queen?” It’s like, well actually, I met her a couple of times! I mean I was young. I started at seven singing in the choir and I finished at 13 but the one that sticks out in my memory is the Queen Mother. She was famous for having these dogs, these Corgis, and there was about six of us pulled from the choir and asked to do like a private sing. We went into this massive room, it’s all a bit hazy, but I do remember the Queen Mother being sat there with the Queen and the dogs and we sang for the corgis and the Queen! And there were a couple of other times, you had to do a little bow when you met her and it’s ‘mam’ like ‘jam’ when you say ‘hello mam’. Not ‘marm’. It’s hello mam, mam like jam.”

The Shires on current single ‘Crazy Days’ and the pandemic

Ben: “It’s so fascinating, Crissie, ‘Crazy Days’, because it was written before this whole pandemic, before the lockdown. I wrote it in my shed in the garden where I’ve got my equipment for writing, I’ve got a piano and stuff … We’ve done four albums and we were away from home so much and I don’t know how you felt, but I felt there wasn’t even time to breath sometimes, and seeing your family and your friends…”

Crissie: “Yeah. We were just constant. We were on the road the whole time. We were away writing the albums, we were away recording the albums. A lot of time spent in Nashville, and if we went over there we were out on the road. We were absolutely having a whale of a time, but I think we missed out on a lot of family time and friends, you know, time to spend with our loved ones. I know for you, you kind of took to your shed and wrote this one in an evening.”

Ben: “I had a bottle of whisky by the piano and I just felt kind of really reflective and it was written almost as a direct conversation to my wife. And we’ve got two young kids, a 2-year-old and a 4-year-old and I was just kind of saying, I know it’s hard, especially as she’s here by herself and it’s quite a lot with the kids. But I said these are the kind of days we have to take every opportunity we can and one day we’ll look back at how crazy they were. And the really interesting thing though, is how much of a different meaning this song has taken on with the whole pandemic and lockdown. And how, I think, a lot of our fans have said this song is helping them, people are going through a tough time and this song means a lot to them it seems.”

Ben: “Crissie do you remember we did a huge TV show back home and on the couch they had Robert De Niro? They were doing impressions during the show and someone said, ‘Crissie what impression can you do?’ and she did the kettle. This is on national television, with millions of people watching.”

Crissie: “It was the biggest TV show we had done to date and I was trapped in this make-up room behind the scenes and my manager came flying in and was like ‘Crissie you’re gonna have to do the kettle!’”

Crissie on being fired for singing too much at work

Crissie: “I only got fired from one and it was kind of laughable. To be honest I think I was underage for working anyway. But genuinely, I was a waitress at the time and I got fired for singing too much! Like is that even a thing?! I was so focussed on wanting to be a singer, I would be cleaning down the tables and they would be like, ‘you’re not working quick enough you need to hurry up.’ So yeah, I got fired from that job because I was so focussed on singing all the time.”